1. Tie a Little Mermaid streamer using my pattern recipe and mail it to me by Oct. 31st.
2. Include a COMPLETE “printed” name and address INSIDE the envelope with your entry.
3. All entries will be on display in a frame at any of the Fly Fishing Shows I attend this season.
4. Any tier can submit an entry, but only one entry per person.
5. All entries must be tied by the person submitting them.
6. Reasonable substitutes for materials will be accepted and are listed with the pattern.
7. Flies will NOT be returned HOWEVER, there will be a drawing for a few small prizes including a Sharon E. Wright signed original presentation streamer, Whiting American Rooster Saddle, 2014 Fly Tyer magazines, and who knows what else will be tossed in!

It was great to be able to swing in to the L.L.Bean Spring Fishing Weekend and say hello to all of the great people hanging out and telling “fish stories”. As usual, the crew at Beans was hard at work sharing their expertise and enthusiasm with customers. I thought it would be fun to post […]

This popular Maine pattern was created by Dr. J. Hubert Sanborn of Waterville, Maine. It is a classic smelt imitation named for the first salmon caught on it by the good doctor. It weighed nine pounds, three ounces!
This pattern is often dressed in tandem or traditional feather-wing style but the original pattern called for “three medium green saddle hackles tied on flat”. This gives the fly alot of action in the water indeed, making it a deadly temptation for unsuspecting trout, togue, bass, and landlocked salmon.
Here’s the classic recipe-

Chief Worumbo (Chief Worumbo of the Sabattus) was a local native American chief of the Abenaki tribe. He was initially known for his friendly negotiations with the first settlers here in my home town of Lisbon, Maine. However, during the Indian uprisings he became an enemy to the whites. It’s said that one night he was fooled by the local settlers, became confused, and his canoe was swept over the falls of the Androscoggin at Little River. He was never seen again.
The great Worumbo Mill, where fine woolens were manufactured for many years, was given his name. The mill is for sale and its future is uncertain. Like the multitudes of salmon that once filled the waters of this great river, it too might fade into lore, becoming only a story of bygone days.

The State of Maine Streamer is a custom fly that incorporates elements of Maine’s official symbols into the design. 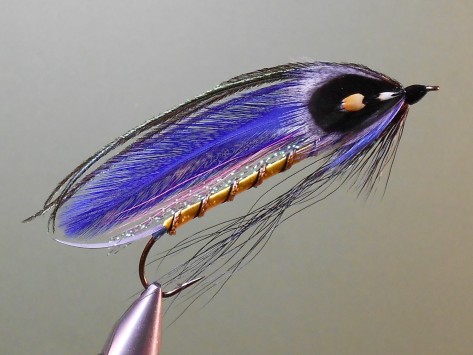 Normally I don’t become engaged in “scuttle-butt” but sometimes you just have to throw your two cents worth in. There seems to be alot of discussion lately about hackle and wings, size and shape, and what-not with Rangeley streamers.  (which are sometimes referred to as New England style, Maine style, or classic featherwing style streamers)  Being that I’m actually FROM here I thought my opinion might count a little. As much as Carrie Stevens can be credited for her “Gray Ghost”, I think it is a disservice to the other anglers of this state to overlook their part in the development of this streamer style. Being FROM Maine I forget that to the rest of the world these flies are a great mystery, but most of the “sports” here have been tying them all along, just like Carrie did, and fishing them succesfully…….just something they do in these parts. You talk to an old angler from up this way and he’ll tell you he ALWAYS tied his streamers like that and some will even say “Carrie who?”.  Now I’m not discrediting Mrs. Stevens OR discounting her contribution to the development of the “Rangeley” style streamer and its popularity. I’m just saying that I have heard it suggested that there was input from other great tiers in this state (like Nellie Newton) and maybe even from some of the “sports” that would come here to fish from Quebec. There weren’t alot of large fly “shops” during Carrie’s time, but then again, there aren’t now either. There was just usually a tier that somebody knew that would tie up what you wanted OR sell you what was working at the time. Alot of flies were just sold at the general store or your guide would have them on hand. I also think it’s fair to say that if 10 tiers all tied the same pattern, from the same recipe, that their “styles” would all be a little different. The wings, hooks, colors, and even materials might vary just a bit. They all might add a little of their own “magic” to their particular flies and often did.

Where am I going with this? It seems to me that individual preference is quite different than “fact”. It is also the reason why we prefer flies from one tier over another. Who is to say what hackle is “right” or “perfect” for a pattern? If the proportions are right, the fly performs well, and fairly represents what we’re imitating, then the hackle is “right”. If you were to ask a Mainer what hackle to use on a Rangeley streamer you would probably get a very practical answer…….”whatever you have 4 of, that’ll keep ‘er up right and wiggle the way she’s ‘spose to”.

In the long and short of it……. these streamers imitate bait fish. When the hackle is wet it should be somewhat skinny. If it’s going in a frame the HOOK can make all the difference for presentation. Let’s face it, different size hooks are sometimes easier to find than the perfect size hackle. To get the most use out of your hackle (especially if it’s strung) pair up some wings and find a hook that works proportionately with them. Pay attention to the gape. If the hackle is thin try using a smaller size gape and a longer length. Don’t be restricted OR intimidated by the speculation that ALL Rangeley streamers have to have “perfect” hackle, with just the right shape, tied only on one of those REALLY LONG streamer hooks that you have to special order. Most of us REAL Mainers tie these on a standard size 6, 7XL streamer hook, like a Mustad 3665A.  Now about those wings……yup, that’s the REAL challenge….learning to “set” them right. I’m not professing to know EVERYTHING there is to know about tying flies OR about Rangeley streamers. I’m just saying…..I’m FROM here and that’s how we do it, ayuh.

This is my new streamer dedicated to Carrie Stevens, creator of the Rangeley style streamer. It was created using alot of common elements found in her custom fly designs. Many of her designs incorporated a flat tinsel tag and rib, over a floss body. I refer to this as a C.S. “common”.  For example, this fly has a common body in pink with gold…..meaning the body is pink floss with a flat gold tinsel tag and rib. She often tied a belly of 4-6 peacock herl with white bucktail tied in underneath.

I selected colors from fashions typical of her era, classic gray, black, and golden yellow since Carrie was a milliner. The shoulder is guinea fowl, commonly used in millinery pieces and representative of her “pearls”. The floss body is pastel pink as Carrie was said to have a sweet and kind demeanor.

The golden pheasant crest throat and topping were a material used in her most famous fly of all, the Gray Ghost.

My next post will include the recipe and a really easy tip for managing that unruly golden pheasant crest!

Here is a close-up of the L.L.Bean streamer, framed and presented to L.L.Bean on March 17th at the L.L.Bean Spring Fishing Weekend. It will be featured on the cover of Fly Tyer magazine’s summer issue which will also feature an article I’ve written about my custom designs, including photos.
I’d also like to mention a HUGE thanks to David Klausmeyer for the beautiful photo and unwaivering support.

On March 17th I had the privilege of presenting Bill Gorman (L.L.Bean’s great-grandson) with a very special custom-designed streamer to commemorate L.L.Bean’s 100th Anniversary. It was a challenge to express 100 years of L.L.Bean heritage on ONE fly! I carefully selected materials from Maine animals including moose, bear, deer, pheasant and duck…….. and incorporated several custom-dyed materials as well. It is a beautiful trout imitation with 5 pairs of wings! L.L.Bean provided several photos from their archives for me to include in the finished frame. I made a brief statement thanking staff for all of their encouragement and support and of course, congratulated L.L.Bean for 100 years of success!
Maine is my home state and I live about 20 minutes from the flagship store. I started tying on a Thompson AA vise that I bought at a yard sale. I learned my basic skills at the L.L.Bean Friday night clinics at the Hunt/Fish Lodge from the great staff that work there.
I would really like to thank all of the people that showed up to support me that weekend including my family, my Facebook friends, customers, and folks I’ve met at shows this season. It was really crazy but none of you went unnoticed….thanks!